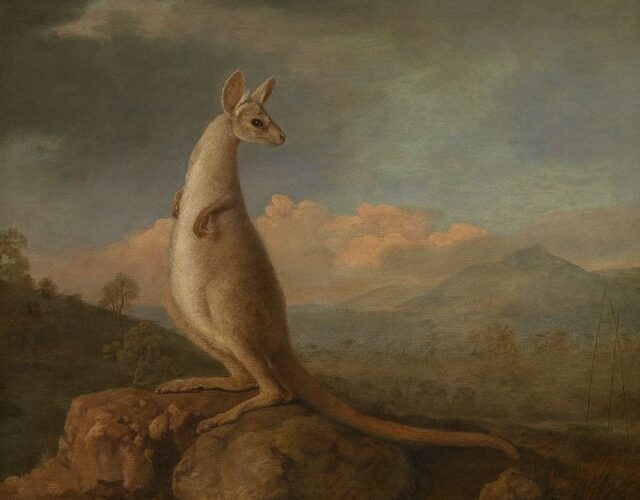 Australia’s most established stone painting is of the landmass’ most notorious creature: a kangaroo.

At around 17,000 years of age, it’s the most established painting yet found in Australia, researchers declared in an investigation distributed Monday.

“This is a significant find, as through these initial estimates, we can understand something of the world these ancient artists lived in,” lead creator Damien Finch of the University of Melbourne said.

The kangaroo was painted utilizing dim mulberry paint on the inclining roof of a stone asylum in the northeastern Kimberley area of western Australia. Other antiquated works of art were found in a similar locale, specialists said.

The Kimberley area is eminent for its rich stone workmanship displays, the Australian Broadcasting Corp. said. The naturalistic style broke down in the investigation is one of the most established of in any event six particular periods of compositions recorded in the locale.

The age of the canvases was controlled by antiquated wasp homes, everything being equal. Specialists found that some stone artworks had the remaining parts of 27 wasp homes, which can be radiocarbon-dated, above and beneath the painted pictures.

By dating the wasp settles, the creators had the option to discover that the artworks were done 17,000 to 13,000 years back.

Finch said it was uncommon to discover mud wasp homes overlying and basic a solitary work of art. Scientists had the option to test the homes to build up the base and greatest age for the work of art.

“We radiocarbon-dated three wasp nests underlying the painting and three nests built over it to determine, confidently, that the painting is between 17,500 and 17,100 years old, most likely 17,300 years old,” he said.

“We can never know what was in the mind of the artist when he or she painted this piece of work more than 600 generations ago, but we do know that the Naturalistic period extended back into the last ice age, so the environment was cooler and drier than today,” Finch said.

Some different pictures were in a similar territory: most of the canvases were portrayals of creatures, including a snake, a reptile like figure and three macropods (a group of marsupials including kangaroos, wallabies and quokkas). Quokkas are creatures about the size of a homegrown feline.

Sven Ouzman of the University of Western Australia, one of the task’s main analysts, said the stone artistic creation would help widen the comprehension of Indigenous social history: “This iconic kangaroo image is visually similar to rock paintings from islands in Southeast Asia dated to more than 40,000 years ago, suggesting a cultural link and hinting at still older rock art in Australia,” Ouzman said.

Cissy Gore-Birch of the Balanggarra Aboriginal Corporation said: “It’s important that Indigenous knowledge and stories are not lost and continue to be shared for generations to come. The dating of this oldest known painting in an Australian rock shelter holds a great deal of significance for aboriginal people and Australians and is an important part of Australia’s history.”